But it was... what happened was the ...understanding of how to move these things forward, and how to create these new products, somehow evaporated,

and I think a lot of good people stuck around for a while, but there wasn’t an opportunity to get together and do this,

because there wasn’t any leadership to do that, so what happens with Apple now is that they had fallen behind in many aspects certainly in market share,

and most importantly their differentiation has been eroded by Microsoft, 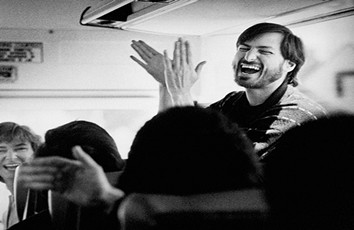 but would provide a good revenue stream for several years, but it’s a glide slope, it’s just gonna go like this.

So it’s unfortunate and I don’t really think it’s reversible at this point of time.

What about Microsoft? I mean that’s the jog not now, and it’s kind of Ford-LTD going into the future.

It’s definitely not Cadillac, it’s not BMW it’s just … you know … what’s going on there, how did these guys do that?

Microsoft’s orbit was made possible by a Saturn 5 booster called IBM.

And I know Bill would get upset with me for saying this, but of course it was true.