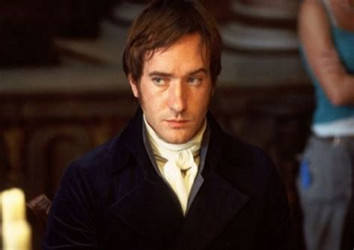 Ocupied in observing Mr. Bingley's attentions to her sister, Elizabeth was far from suspecting that she was herself becoming an object of some interest in the eyes of his friend. Mr. Darcy had at first scarcely allowed her to be pretty; he had looked at her without admiration at the ball; and when they next met, he looked at her only to criticise. But no sooner had he made it clear to himself and his friends that she had hardly a good feature in her face, than he began to find it was rendered uncommonly intelligent by the beautiful expression of her dark eyes. To this discovery succeeded some others equally mortifying.

Though he had detected with a critical eye more than one failure of perfect symmetry in her form, he was forced to acknowledge her figure to be light and pleasing; and in spite of his asserting that her manners were not those of the fashionable world, he was caught by their easy playfulness. Of this she was perfectly unaware; - to her he was only the man who made himself agreeable no where, and who had not thought her handsome enough to dance with.

He began to wish to know more of her, and as a step towards conversing with her himself, attended to her conversation with others. His doing so drew her notice. It was at Sir William Lucas's, where a large party were assembled. "What does Mr. Darcy mean," said she to Charlotte, "by listening to my conversation with Colonel Forster?"

"That is a question which Mr. Darcy only can answer."

"But if he does it any more, I shall certainly let him know that I see what he is about. He has a very satirical eye, and if I do not begin by being impertinent myself, I shall soon grow afraid of him."